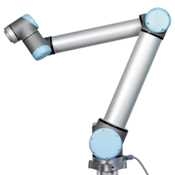 UR 10 by Universal Robots
More Information
Weighing 63.7 lbs, the UR 10 has a payload of 22 lbs and reach capabilities of 51.2. The UR10 shares the same benefits as the UR5 when it comes to safety, precision, and ease of use.
Due to their low weight, the UR robots are easily moved around the production site to complete new automation tasks and can operate in the smallest of production areas. Instead of expensive sensor technology, the robotic arm utilizes a unique patented technology to measure electrical current in the joints to determine force and movement. This has resulted in an extremely price-competitive solution enabling even small and medium-sized enterprises to automate production that was previously unthinkable.

A UR robot doesn't quit after a year. Rated life is 35,000 hours with full payload and maximum speed. Replacing a joint can be done in 30 minutes.
Both robot arms can withstand significant environmental impact and changes in temperature. They have low power consumption and a comparatively noiseless operation.
For More Information, Please Contact Us At:
Axis Inc.
210 Meister Avenue
Somerville, NJ 08876
Website: www.axisnewjersey.com
Phone: (908) 429-0090